L.Y.R.A. is a project by Darina /Rina/ and Dimitar /Nigor Pilnatsa/ aimed to create Ritual art. They are artists and lawyers who live and work in Bulgaria. Darina and Dimitar are also the organizers of the Old School Residency – Gorna Lipnitsa, Bulgaria. They have been organizing various art events since 2010. In 2012 L.Y.R.A. started their work on creation and development of Ritual art /RA/ as a form of art. The idea for its creation is a result of continuous search for a modern and conceptual vision of art that integrates the principles of rituals and ancient knowledge. At the heart of Ritual art are the ideas of the Manifest 2012 of the Old School Circle for the Beginning of the New World. Ritual art follows a clear goal of public significance that goes beyond the familiar and known, and at the same time is understandable outside the limits of planet Earth.

In their works L.Y.R.A. mix the old knowledge and symbols with principles of modern physics / quantum theory and theory of relativity/ along with legal/ political models and techniques. Their works are ritually created imaginary sanctuaries including paintings, collages, texts, objects and performances. Each work is a result of previous research and study of the specific topic. At the end of this process the accumulated knowledge is incorporated in the work.

L.Y.R.A. work with the idea that every ritual artist is a creator and legislator who works in a peaceful and balanced state of mind to be able to perceive the fundamental unity of the Universe. Only in this case its actions create interactions that dynamically change and transform the Universe.

PERFECTION IS NOT AN ACCIDENT

The purpose of this art work is to create the image of the ritual artist as a collection of qualities. The process of its creation is a peculiar journey through time and space as a conscious and purposeful act. For eighteen months, we walked thousands of miles, read books, painted and pondered. We believe that, through the actual travel and the changes that the journey leads to, we all actually move our visions and ideas in the desired direction and into the intangible world. The path as a means of enlightenment.

Our work is a kind of ritual naming, and in the form of a picture or a collage, we produce specific qualities that the ritual artist must possess.

In this exhibition we are presenting an installation showing:

The Writer Who Loved to Read

Night of the Dark Wizard Meeting with the Moon

Ritual Connection of the Whole World and the Surrounding Villages

2. Games with the audience in the form of a ritual gathering in a circle

The picture is a reference to the work of a famous English painter. It depicts the Italian writer  and scholar Umberto Eco/born 1932 – deceased 2016). This person possessed a lot of  academic knowledge that entwines remarkably in his seven novels read by millions of people  around the world. In the picture the writer is presented in connection with his novels.

From you, Umberto Eco, we take the quality of KNOWLEDGE we gift them to the ritual artist.  Ad infinitum…

His last flight is on 16 May 2015 in the US Yosemite National Park. Dean Potter will remain in history as one of the most famous adventurers in the world – with dozens of dangerous parachute jumps, rock climbing on inaccessible rocks, and rope walking over huge chasms.

Also known as the Dark Wizard and the Man Who Thinks He Can Fly, Potter is considered a legend in his extreme pursuits because he dares to do what others do not even dare to think of. He lived in the Yosemite area for 22 years, trying all the time to test the limits of human abilities. He believed that one can fly and walk on the air, as long as one is stubborn and willing. Dean Potter is a visionary, with a rich imagination, and for himself he says he is not an extreme athlete, but an artist who expresses himself and his art form through his actions.

In this picture of ours, we associate with the eternal spirit of Dean Potter – the man who inspired thousands of people to look beyond and to ponder the limits and levels to which the spirit can reach if let free.

From you, Dean, we take the qualities of PHYSICAL ENDURANCE – BRAVERY – A BIT OF INSANITY, and we gift them to the ritual artist. May your flight be bright!

* One of Dean Potter’s most beautiful achievements is in the summer of 2011 when he literally walks on the Moon – going over a rope stretched between two rocks at the Cathedral Peak in Yosemite, USA. The moon rises above the peak, and Dean passes barefoot along the stretched rope. All this in less than 3 minutes.

* In the painting we have used the art of painting of a famous American painter.

In this collage, we use the so-called ritual connection to make a connection between the ritual artists around the world and Gorna Lipnitsa. At the base of the collage there is a picture of the village over which we have placed the countries and the continents. Between these and Gorna Lipnitsa there are red connecting threads.

The purpose of this technique is to connect the place where the ritual art was born and the places from where the participants in the editions of the residence came from.

Effect of connection for the ritual artist:
ABILITY TO WORK WITH FOLLOWERS – TO ESTABLISH CONNECTIONS – TO SEE THE WHOLE PICTURE 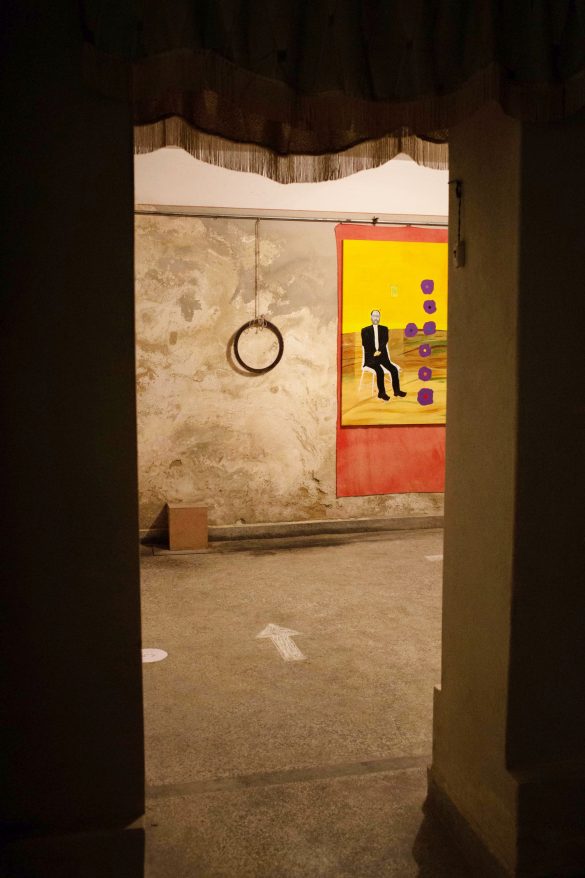 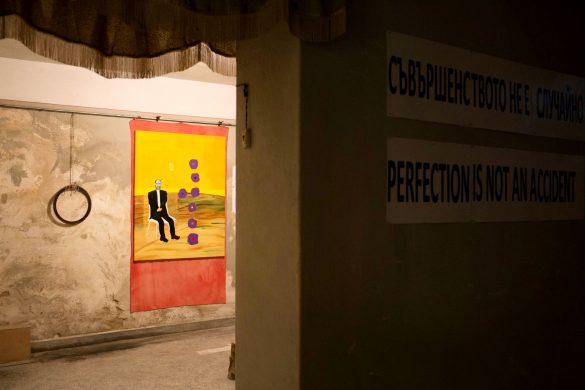 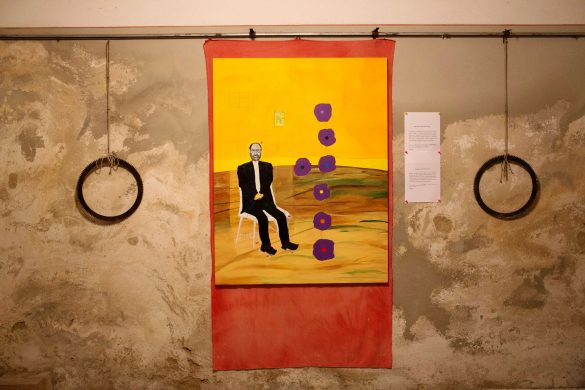 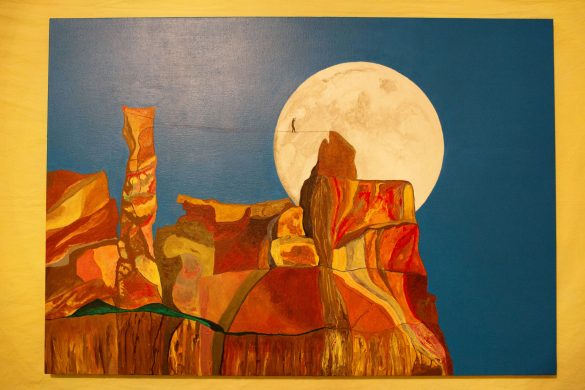 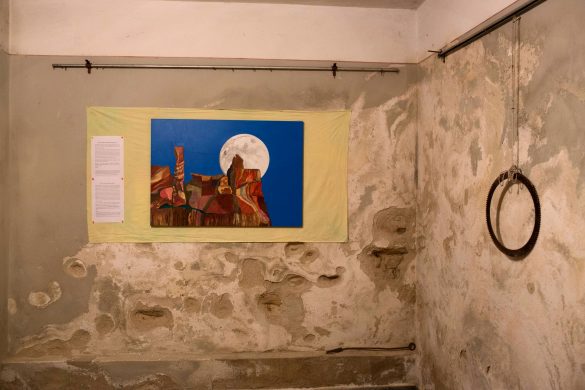 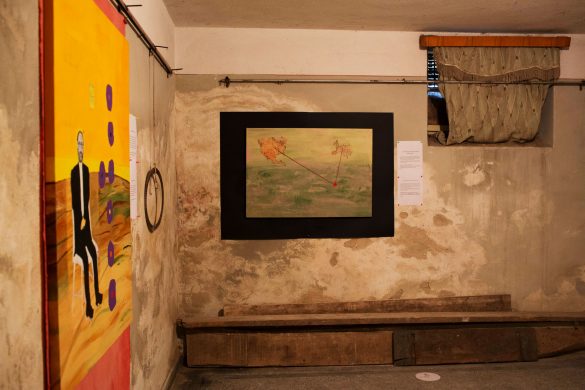 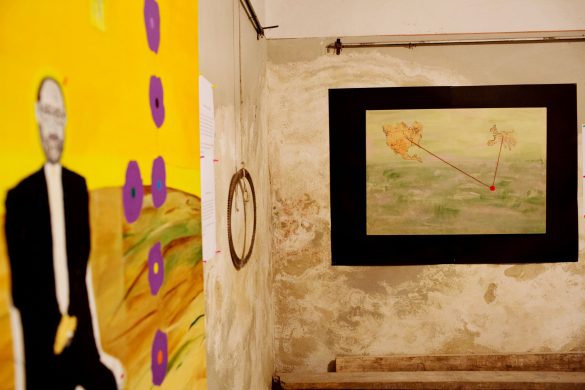 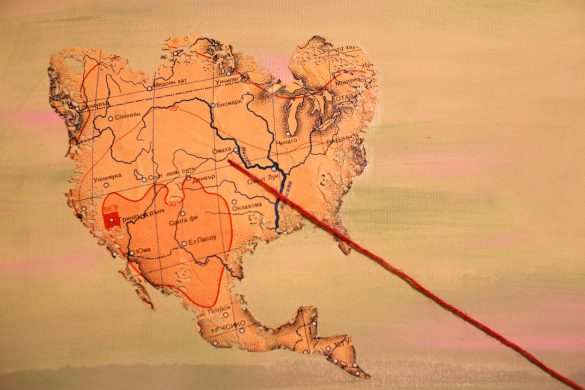 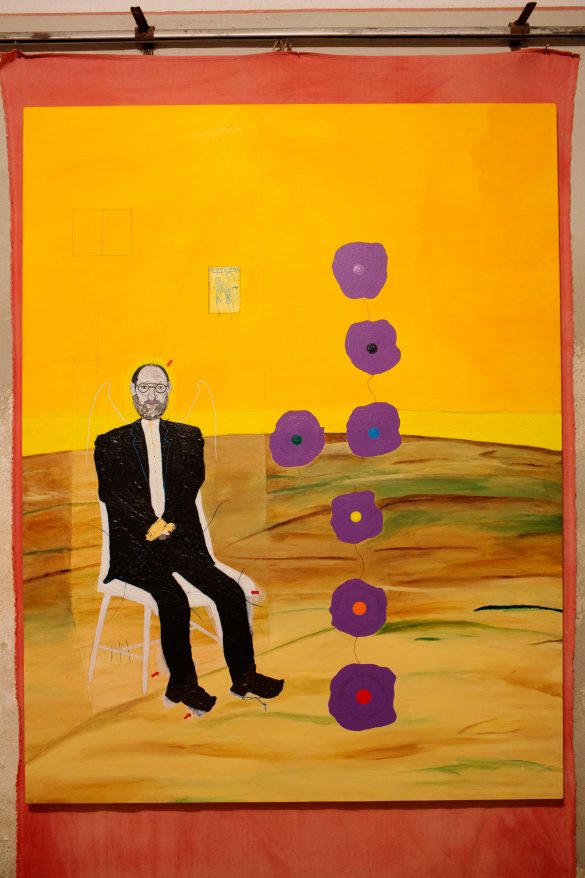 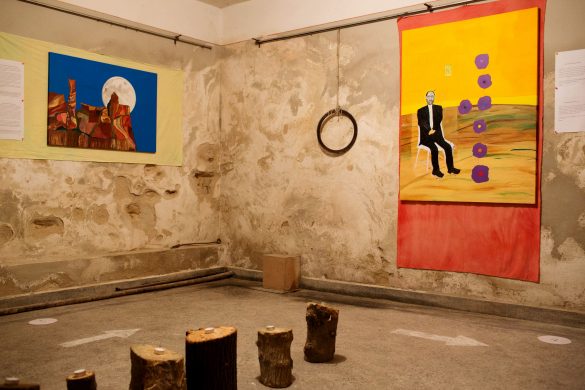 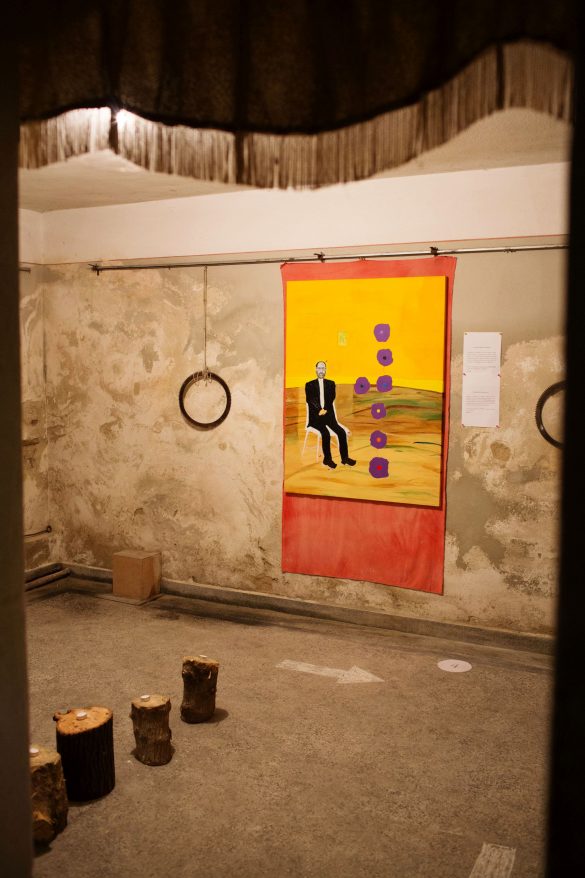 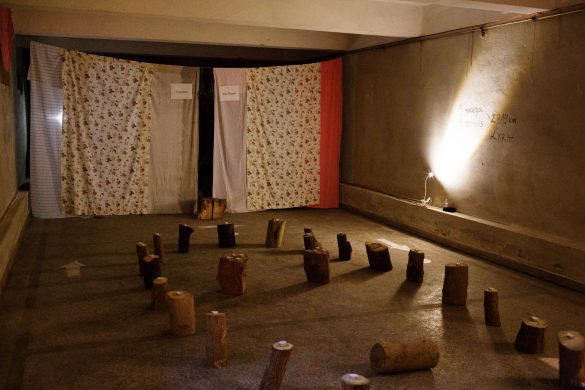 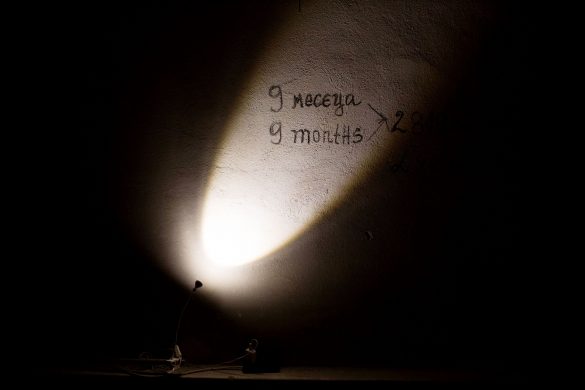 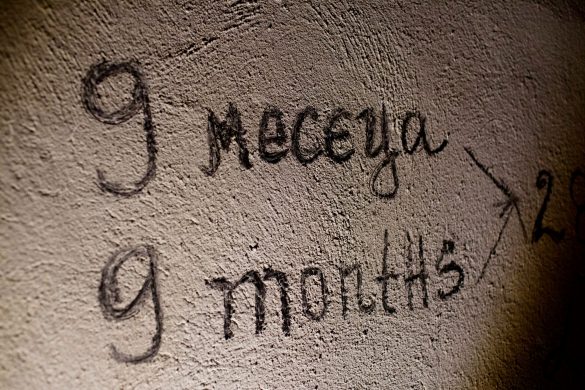 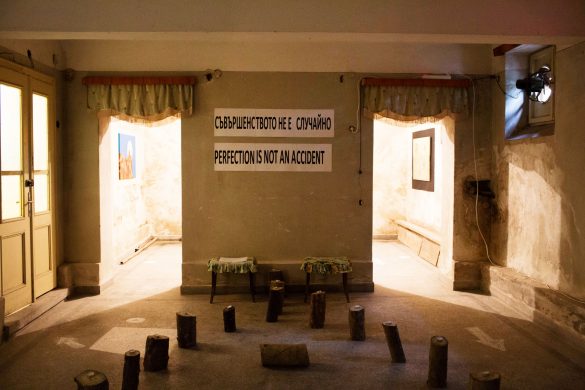 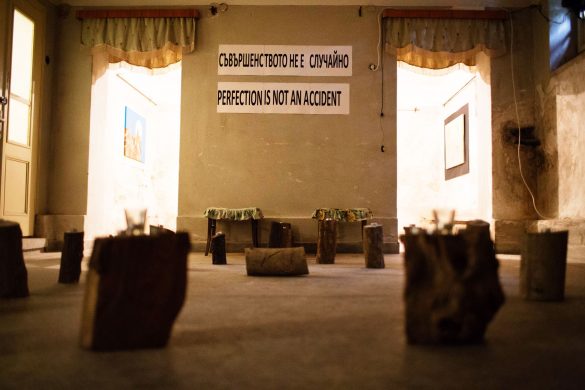 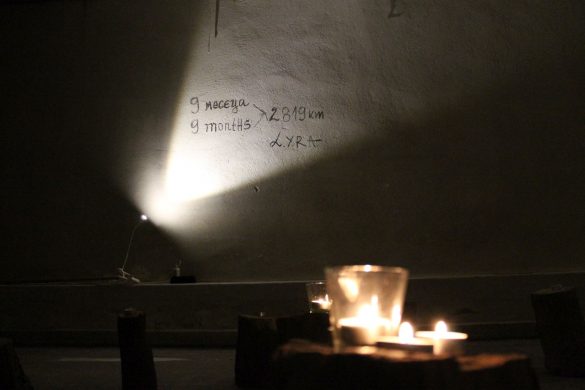 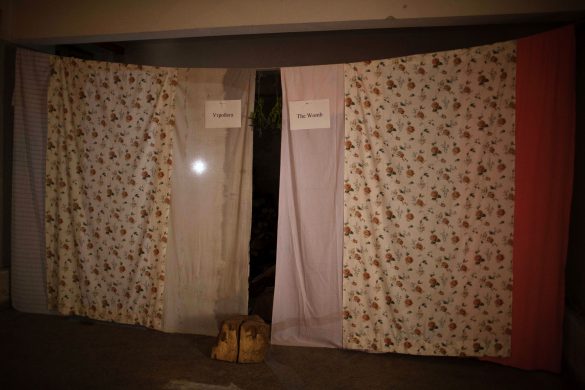 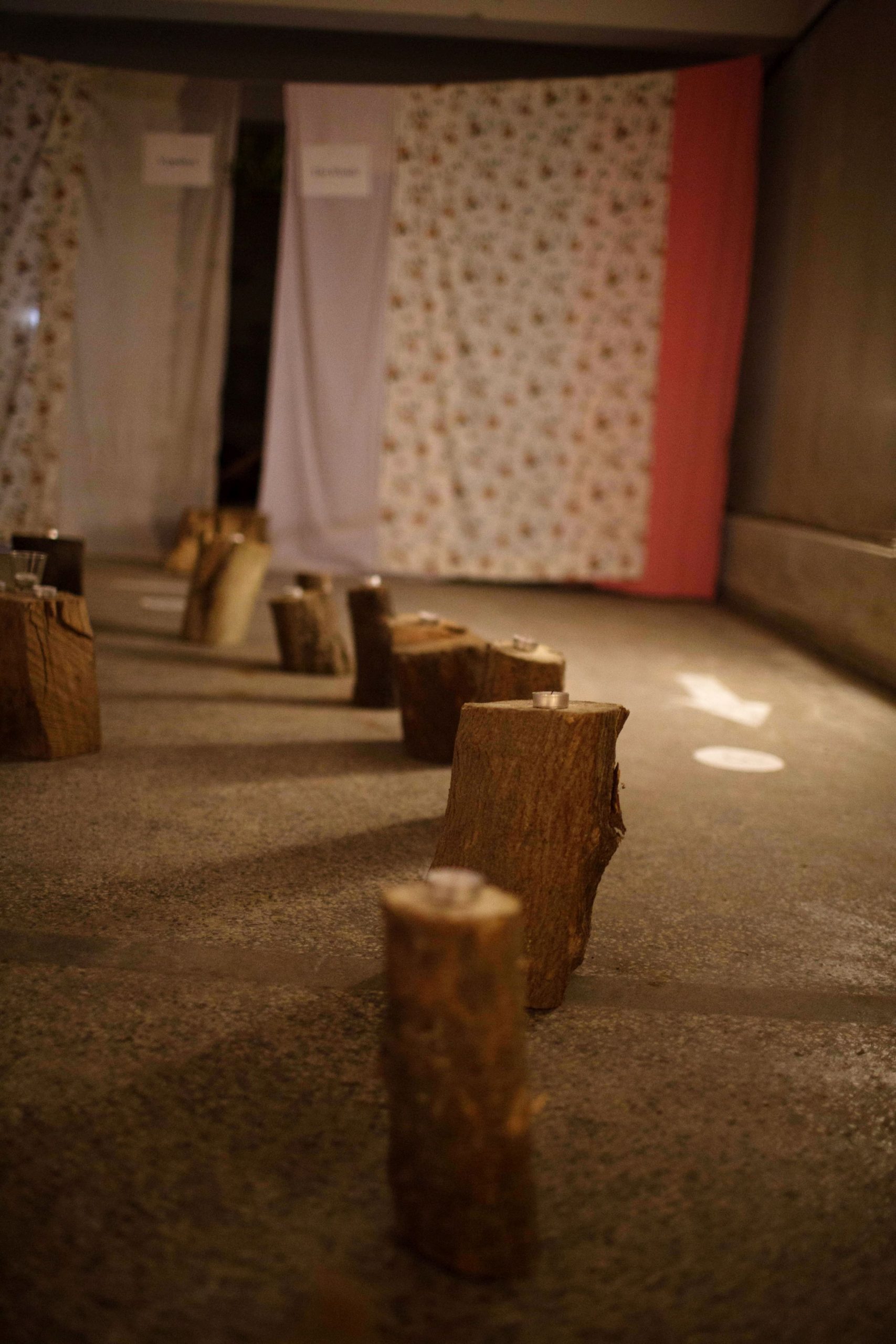