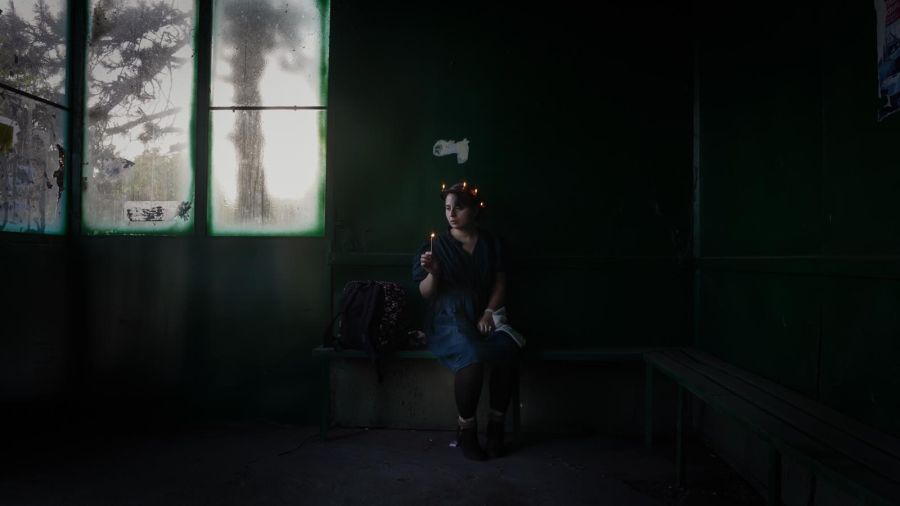 This series, Acolytes for a New World, is about ushering in the new while occupying those spaces—be they physical, liminal, or social–of the in-between.

As a child, I was an acolyte in the community church, one of the few churches that allowed girls to perform this sacred role. The acolyte’s job was to, at the beginning of every service, ring the huge church bells—for me, then, more like a rope swing than anything else—and carry the fire to light the altars up the aisle to begin the service. At the end, we’d walk the aisles again and snuff the candles out. This signified the transition in and out of the “holy time,” and the sanctified space, of the worship.  We were taught, as children, not to yelp or jump if the hot wax melted onto our hands during the lighting, so as not to disrupt the ceremony of it all. I think a lot about the beautiful, threatening, fragile and painful thing that the hot wax represented as it would drip down the candle and onto our tiny fingers, and the beautiful and painful fragile thing that change and transition represent as well.

I have spent a lot of time considering the meaning and manifestation of sacred spaces; for me these are often those spaces of the “in-between.”  I feel that right now, in the world, we are on the precipice of change, or hopeful for it—at the near-end of a global health crisis, and significant political shifts worldwide as well.  Gorna Lipnitsa, too, seems to me to have a number of spaces of “in-between,” harkening back to its communist history, hopeful in the strong sense of community that I feel here, but with so many visual markers of an order that once was, present, like skeletons, in the space. After lighting candles in the chapel, I began to consider what an acolyte for a new world—one hoped for, manifested, or worked toward, in this waiting-space and time that we are collectively occupying in 2021.

For this series, I chose to take photographs in found in-between spaces in the community, acting as acolyte, sanctifying them with fire via candles, if only temporarily.  I drew from imagery from my own religious upbringing in the Southern United States—that of sacrament, chosen or imposed blindness, and water, while acknowledging the status of fire, fate, and future in regional legends and folklore—and, of course, ritual.

Sarah Phillips is a multi-media artist located in Harrisonburg, Virginia.  She earned her BFA in Art (photography and painting,) and BA in scenic design at James Madison University in 2017, and an MFA in Intermedia Studies, also from JMU. in 2020, she completed a CAS Arts and International cooperation at the Zurich University of the Arts in Zurich, Switzerland. She has shown work across Virginia, Washington, DC, Rome, Italy, and has done mural projects in Illinois, Bucharest, Romania, Virginia, and Panama, and is a Virginia Museum of Fine Arts 2019-2020 Fellow.

The Old school art residency presents ALEJANDRO ZERTUCHE – a performance artist from Mexico – this Saturday, 23th of October at 5 pm .

The Old school art residency presents SЕLIN GöKSEL– a multimedia artist from Turkey/Spain – this Saturday, 23th of October at 5 pm

“GENERATION ‘I CREATE’” – ART FROM CHILDREN FOR ADULTS