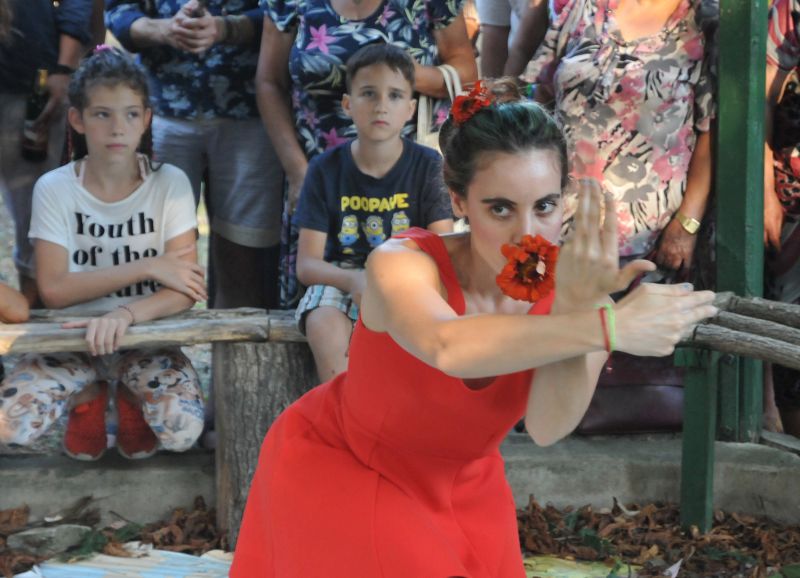 Paula Ailen Belli, is a scenic artist born in Neuquen, Argentina. Actress and performer, her work is based on interdisciplinary limits and its main theme is migration, territory and body. In 2009 she participated in the “Festival Danza y Perfo 09” in Salta, Argentina. In 2010, she co-founded the collective Circo Freak, an intervention group, performing street interventions and presenting the works, “Circo Freak” and “Circo Criollo”. In 2011 she joined as a member of the CIA Pampa Traviesa Población Creativa. Together with the group they made 8 plays presented in different places in Argentina and Mexico.

In 2013, in Mexico, she participated in the Theater Festival for the End of the World (TFM), presenting the piece “Proyecto Caracol” in an abandoned soft drink factory. In 2014, she was part of a 2-month artistic residency in Tampico, Tamaulipas, carried out by the group “Asalto Teatro”. There she made numerous interventions and street actions in the emerging Prometheus Project for the memory of missing artists in the state of Tamaulipas, such as the re-naming of streets with names of missing persons from the town. Paula participated in the “Festival of the Beast” in its third, fourth and fifth emission (2014-2015) offering the workshop “Women in transit, Experiential Workshop” aimed at migrant women, in turn presented the works “Flight in V, strategies to migrate and “Stories in the country of the bougainvillea”. In January 2015 she toured the Riviera Maya in Mexico with the work “Pueblo Nuevo” in collaboration with the collective Pampa Traviesa, Población Creativa. Since 2014, she participates annually in the project “The road to Thar” (Mexico) in memory of the comrades Fernando Landeros, Jefte Olivos and Omar Vásquez, carrying out different actions. She is the director together with Cruz Lisandro Morena of the short film “Unity of the birds, cartography of a body that migrates” based on the testimonies of Central American migrants in the southern border of Mexico. She is working on a film project “COSTA AZUL” where she is an actress and part of the management team.

Instructions to overthrow a government

Focus on the periphery and attack from there. Exile from established forms, run, walk, self-expel, abandon the notion of gender, author, artist, family, class. Occupy the periphery as a center. DESERT. Be your own experiment, dance between the limits.

FIND yourself with the pack, those other defectors.

Fall in love with nomadism.

Fall in love with the ENCOUNTER.

Recognize yourself in the periphery, where the diversity rules and lives. From there cooperation is born.

THE ENCOUNTER IS SACRED.

The meeting with the herd is sacred. From there, we will generate new models of economy, new ways of bonding, new ways of being in this world.

PLEASURE IS OUR TRENCH.

Performance of the ancient ritual Nestinarstvo