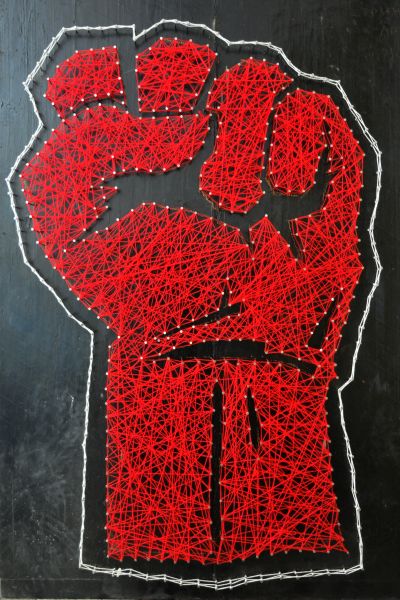 In 2018 we perceived the idea about the ritual art revolution and how through art we can achieve an artistic rebellion, which aims at changing the ambient reality in a creative way.

1. What is RITUAL REVOLUTION?

Revolution is a critical turn in the socio-economic conditions in which one model of government is overthrown and replaced with another completely different political, social and economic model. The Revolution may occur at a favourable historical moment, both at national and international level. This moment is Now. It is an organized action of people caused by great dissatisfaction with the existing model of government, and such discontent exists today. Revolution is a desirable change; it is the introduction of something new.

The Revolution is a Ritual, and it is, by its very nature, a series of symbolic actions aimed at achieving a specific purpose. The strong necessity thereof occurs during time of transition or imbalance, and it is the means of restoring it. The Ritual is the creative activity of man, the continuation of the divine. It plays the role of a bridge from one world to another. The participants therein are the builders of bridges, they act as magicians who arrange the Universe and with it the small human world of the community and the state. Through the Ritual we destroy one reality and create another.

The Ritual Revolution is both a revolution and a ritual aimed at a complete reformation of society, through the institutional creation of politics as art and art as a policy. It is the struggle between ideologies and value systems. The Ritual Revolution may originate from a small group of persons /art evolutionists/, but its success depends on the approval and support of the people. It uses artistic practices/approaches for policy-making. It is one permanent revolution – once it has begun, it cannot end until it has established the Creative Model of Governance all over the world. The Ritual Revolution is a planned non-violent change that uses all the legal methods and means to achieve the ultimate goal, namely establishing the Creative Model of Governance.

„Every man and every woman is a Creator“

I create the I.

Creativity is a process of circularity. In the beginning, I create myself. In the middle I create myself. I also create myself at the end. The basis for our creation is designed as a framework of our land, nation, kind and family, but it is YOU who paints on the canvas in the frame. This is what you learn, read, see, dream, the accidents and intentions, revolutions, the love – all this directs how you paint on the canvas. The important thing is to realize that you are the Creator and the Canvas at the same time. Take everything from yourself and find everything around you to perform the ritual of creation and to create yourself, aiming for perfection in every detail, knowing that this is impossible.

Creating yourself reaches a stage where you can begin a second parallel creative process.

The Human who has created her/himself may create Partnership.

Partnership as a creative product is the minimalist community at the heart of any major society.

The Human/Artist who has created partnership may create a Local community or a Group.

The Local community is the smaller version of the bigger politically organized community /the State/.

The Artist who has created a Group may create a State.

The Artist who has created a State may create a Union of States.

The Artist who has created a Union of States may create a World.

The Artist who has created a World may create a Universe.

The Artist who has created a Universe may create Her/Himself.

I create – I form, I make, I produce, I create, I build, I invent, I shape, I find, I establish, I discover

Creativity is a mental and social process of human activity that creates completely new, original material and spiritual values. It is connected to the generation of new ideas and concepts or new connections between existing ones. Creativity is a possible way to develop every single thing. Each person inherently is an artist, a free creator and an author. The self-consciousness of a person as a creative being, as an artist, is inherent, not a derivative self-consciousness. Creativity is one way of creating the world. People are originally given the possibility of creativity and creation is possible as a constant process. Those who start to create are rewarded with a sense of thoroughness, purposefulness and satisfaction.

Man has the same composition with the universe, he is a complete small universe. The Universe may be known by the one who is a universe himself/herself, who has the power to oppose the universe as equal thereto and as capable of incorporating it into itself. Creativity is the result of the revelation in man of the image of the artist, of God, of the divine power. Creativity creates another world, continues the act of creation. True creativity is theurgy, the divine act, establishing a creative world.

Creativity is inextricably linked to freedom, but to freedom that has purpose and content. In creativity, freedom is “for,” and not “from”. The content of freedom is love. The artist must be free in order to express himself/herself and to make new creations. Only the free man creates. Freedom of man is connected with the freedom of the world and is only realized in the liberation of the world. Only the free person knows freedom, only the creative person knows creativity.

Beauty is not only an objective in art but also an objective in life. The creative world assumes living in beauty because the artist expects from his creation as much beauty as goodness.

Once achieved, the creative world will be supra-moral. Creative morality is built on honor, masculinity, and caring for the creative ascent. There are two possible moral paths we face – obedience and creativity, the “arrangement” of the world and the “rising” of the world.

So far, creativity has often been born out of imperfection and flaw, the rebellion in the status quo was tolerated, which, /sadly/, is a sales approach. All achievements of art and culture are symbolic – they are not realistic. So far all the art works of “culture” have been only a sign and preparation for the true creation of another, new world – a world of creativity, a creative world. Today’s person-creator can no longer classically, i.e. according to the norms, create art, culture, science, economics or politics. Everywhere he/she wants to reach the limit, to cross beyond the borders, to create a new being – to elevate the failed mysticism of creativity.

We try to imagine where is the territorial conception and origin of the idea capable of transforming the world radically and where this idea may be developed this idea into a teaching /movement/.

We are on the planet Earth. There are 7 possibilities /continents/.

Among the many possibilities, it is most likely for this to happen in a place where there are accumulations of centuries-old states, empires, culture, art, philosophies, experience of world wars and revolutions, and all of these have been experienced by peoples who have intertwining history. Such a place is Europe – the second smallest continent on Earth and third by population after Africa and Asia.

Where in Europe such a philosophical concept can be implemented in real life, where there are prerequisites for it to survive and strengthen, and not be destroyed inchoate?

Our initial intuition tells us that it is most likely to happen in a place where people have kept their savagery, disobedience and connection to nature where there is no traditional political and economic stability because the order is often born in chaos and desire for change. Such a place on the continent of Europe is the Balkan Peninsula with the highest point at the Musala peak, Bulgaria.

Same ideas appear periodically during different epochs, but every idea’s  time comes, when it can possibly be realized.

The simultaneous happening of Omens:

Many terrorist acts on a faithful basis;

is a portent/prognostication, that  the time for a Creative Revolution is